Al-Quds Al-Arabi, an Arabic-language news source out of Jerusalem, recently published an essay entitled: "The Taming of Trump and his Appeasement." The piece compares world leaders' attempts to negotiate and deal with Trump to Petruchio's taming of Katherine. The following is a rough translation of the essay's opening:

One of William Shakespeare's plays, "The Taming of the Shrew," tells the story of a rich young man marrying the famous daughter of a successful merchant father who is famous for her recklessness and cruelty. His use of many tricks to tame her, ranging from violence to claimed madness to denial of the comforts of life, made her, after a lengthy conflict with her intelligent husband, the most obedient of her father's daughters, and her inheritance doubled!

The play, perhaps because of its comedic character, is suitable as a political approach to the ways in which world leaders have treated US President Donald Trump, who is also famous for a history that combines television entertainment and significant wealth with reckless populist policies that strike left and right and call for severe reactions from foreign countries, from judicial and political institutions, and from the American and global media.

A number of things are striking in this comparison, not the least of which is the recasting of Trump, who boasts a masculinized persona, as a Katherine who must be tamed by more reasonable forces around him. I wonder if the author has ever read The Tamer Tamed?

Arabi21 News recently published a portrait of Aleppo in anticipation of its fall. Much of the article is an effort to emphasize the deep history of the city and its people. Alongside reminders that the city is among the oldest in the world, and listed among its contributions to world culture, the article states:

"Among the witnesses of Aleppo's public renown is that it is mentioned twice in the stories and plays of William Shakespeare, in Macbeth and in Othello."

The passages in question are, of course, the words of the First Witch in Macbeth, Act 1, Scene Three: "Her husband's to Aleppo gone, master o' the Tiger," a reflection of the city's place in the economy of Jacobean England, and of Britain's shipping ties in the Mediterranean.

The second is far more famous, as Othello's final speech before his death in Act 5, Scene 2, in which he describes his killing a Turk who had beaten a Venetian:

Soft you; a word or two before you go.
I have done the state some service, and they know't.
No more of that. I pray you, in your letters,
When you shall these unlucky deeds relate,
Speak of me as I am; nothing extenuate,
Nor set down aught in malice: then must you speak
Of one that loved not wisely but too well;
Of one not easily jealous, but being wrought
Perplex'd in the extreme; of one whose hand,
Like the base Indian, threw a pearl away
Richer than all his tribe; of one whose subdued eyes,
Albeit unused to the melting mood,
Drop tears as fast as the Arabian trees
Their medicinal gum. Set you down this;
And say besides, that in Aleppo once,
Where a malignant and a turban'd Turk
Beat a Venetian and traduced the state,
I took by the throat the circumcised dog,
And smote him, thus. [Stabs himself]

In a way, it is poignant that defenders of such a great city cite as evidence of its humanity the words of a writer such as Shakespeare. Syrians, after all, do not need Shakespeare in order to be human. There is much in Aleppo's history that is admirable and noteworthy, aside from two brief mentions by a writer from an island far away.

And yet, in light of current events, there is something very fitting in the fact that one of Shakespeare's most tragic characters ends his role with a speech that essentially says:

"Remember Aleppo"
Posted by Unknown at 8:02 AM No comments: Links to this post

Abd al-Raheem Youssef has just published a new translation of Shakespeare's Midsummer Night's Dream in Egyptian colloquial Arabic. To my knowledge (and according to the translator), this is the first time anyone has undertaken such a project. Though there are a number of translations of Midsummer in Modern Standard Arabic, few exist in the Egyptian dialect. This is reflective of a growing trend of Shakespeare translations into colloquial Arabic. Certainly curious to see more! 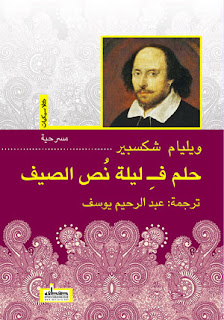 Posted by Unknown at 4:43 PM No comments: Links to this post

Today being the 400th anniversary of Shakespeare's death, now seems as good a time as ever to highlight a few things that have happened in the world of Arab Shakespeare scholarship since Margaret Litvin "passed the torch" for this blog at the beginning of the year:

Another book by Sameh Hanna (University of Leeds), Bourdieu in Translation Studies: The Socio-cultural Dynamics of Shakespeare Translation in Egypt, was published by Routledge in late March. In it, Hanna explores Arabic translations of Hamlet, Macbeth, Othello, and King Lear in light of Pierre Bourdieu's "sociology of cultural production." (http://www.amazon.com/Bourdieu-Translation-Studies-Socio-cultural-Interpreting/dp/1138803626/ref=sr_1_1?s=books&ie=UTF8&qid=1461429735&sr=1-1&keywords=sameh+hanna)

On April 5, the Globe to Globe Hamlet tour, which consisted of a company of actors from Shakespeare's Globe in London performing Hamlet in every country in the world at least once, finished its tour of the Arab world with a performance in Erbil, Iraq. This tour included performances in the West Bank and in refugee camps near (but not within) Yemen and Syria, as well as two shows in Malta (in lieu of Libya). The group's visit to Saudi Arabia on January 9th likely marked the first professional production of Hamlet on Saudi soil. (http://globetoglobe.shakespearesglobe.com/hamlet/the-map/north-asia?date=01+Apr+2014)

Lastly, this blog received a shout-out on arablit.org in a post by freelance journalist M. Lynx Qualey entitled "Arabic Shakespeares: From Theatre to TV to YouTube." The post features "out-takes" for another article of hers posted today at The New Arab: "The Arabic Shakespeares: Subversive, political, and entertaining."

In the near future, look forward to posts about the Shakespeare conference occurring today in Alexandria, Egypt (live-tweeted by @GlobalShaxpeare), as well as a prominent Egyptian Shakespeare scholar and translator of the 1920s and 30s who later immigrated to the United States and has been described as "immigrant zero" for Egyptian-Americans.

Posted by Unknown at 10:09 AM No comments: Links to this post

After almost ten years of keeping up this blog -- sometimes obsessively, but alas often desultorily -- I'm delighted to hand it over to fellow Shaksbir-ologist David Moberly of the University of Minnesota.

Trained as a bona fide early modernist ("Turk" dramas, captivity narratives), David has more recently turned to modern Arabic adaptations of Shakespeare (1927-present). He has already been running a fantastic Facebook feed of Shakes-related Arabic news and cultural production, and he has contributed some fun movie notes to the Global Shakespeare online archive. We haven't met in person, but hopefully that will happen at the Arab/ic panel at the World Shakespeare Congress in London this coming August 5, 1:30-3pm.

Posted by Margaret Litvin at 12:49 AM No comments: Links to this post

Texas A&M University has decided to support the World Shakespeare Bibliography Online by bringing in a PhD student to work on this project full time. This is a really cool resource but much in need of updating. It would be wonderful to get an Arabist into this position!  Details at http://www.worldshakesbib.org/intro/graduate_fellowship.html

Here's the beginning of the announcement:

The World Shakespeare Bibliography is seeking doctoral fellows interested in early modern literature and/or digital humanities.
The selected fellow will be an incoming PhD student in English at Texas A&M University. The World Shakespeare Bibliography PhD fellow will serve as a graduate research assistant in the English Department at Texas A&M, which pays a monthly stipend and includes health insurance. The University pays tuition for students holding fellowships and assistantships.
The World Shakespeare Bibliography PhD fellow will work for the World Shakespeare Bibliography for one year. The fellowship is for nine months, with a strong likelihood of summer support. After the first year, students will be shifted to a graduate teaching assistantship in the English Department, at the same funding level. Students are also eligible for many additional funding opportunities, through the English Department, the College of Liberal Arts, the Office of Graduate and Professional Studies, Cushing Memorial Library and Archives and the Melbern C. Glasscock Center for Humanities Research). Graduate assistantships are renewable for a total of five years, contingent on good progress toward the degree.
The successful applicant will have the opportunity to learn about the cutting edge of Shakespeare scholarship and will gain work experience in a longstanding global digital humanities project. Fellows will have the opportunity to work in a vibrant department with strengths in early modern studies and digital humanities. World Shakespeare Bibliography fellows will be encouraged to take advantage of the rare book collection at the Cushing Memorial Library and Archives and opportunities available through the Initiative for Digital Humanities, Media, and Culture. The World Shakespeare Bibliography PhD fellow will be eligible to apply for funded conference travel, a student exchange to Aberystwyth, Wales, and further training programs such as the Digital Humanities Summer Institute. Texas A&M is a member of the Folger Institute Consortium, and our students and staff regularly participate in Folger Shakespeare Library events.
Ideal applicants will be strong academic candidates with interest in early modern studies and/or digital humanities. Basic computer skills required: specific training will be given upon arrival. The strongest candidates will be self-motivated, detail-oriented students looking forward to gaining new research skills. Second languages are helpful but not required.

Posted by Margaret Litvin at 2:19 AM No comments: Links to this post

The British Council is supporting some scholarships to attend the congress in the UK this summer. Here's the announcement. Deadline Monday 16 November.  It would be great to see some early-career Arab Shakespeareans there.
Posted by Margaret Litvin at 3:15 AM No comments: Links to this post