"To be or not to be an Israeli Arab"

Just came across this 2010 essay in Comparative Literature: "To Be or Not to Be an Israeli Arab: Sayed Kashua and the Prospect of Minority Speech-Acts."  Gil Hochberg's invocation of Hamlet (and, perhaps unintentionally, of a post-simple-nationalist Arab Hamlet tradition) in this context seems felicitous. Whose language to speak? Whose identity to embrace? Which cultural performances will "denote me truly"? 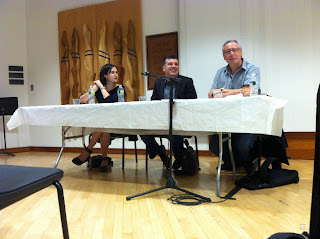 I saw Kashua speak at Tufts last spring, at a wonderful event co-hosted by Jonathan Wilson of the Humanities Center and my friend Amahl Bishara.  At the Tufts Hillel, of all places.  (The plaque behind him says, ironically, "How good and pleasant it is for us all to dwell together.")  Then went home and read his Second Person Singular in two nights.  His major intertext in that book is not Shakespeare but Tolstoy, The Kreutzer Sonata, seen through the prism of Hebrew translation at that. In any case, his observations on the paradoxes of upwardly mobile Arab-Israeli (as he calls it) identity are witty and convincing.
Posted by Margaret Litvin at 9:32 AM