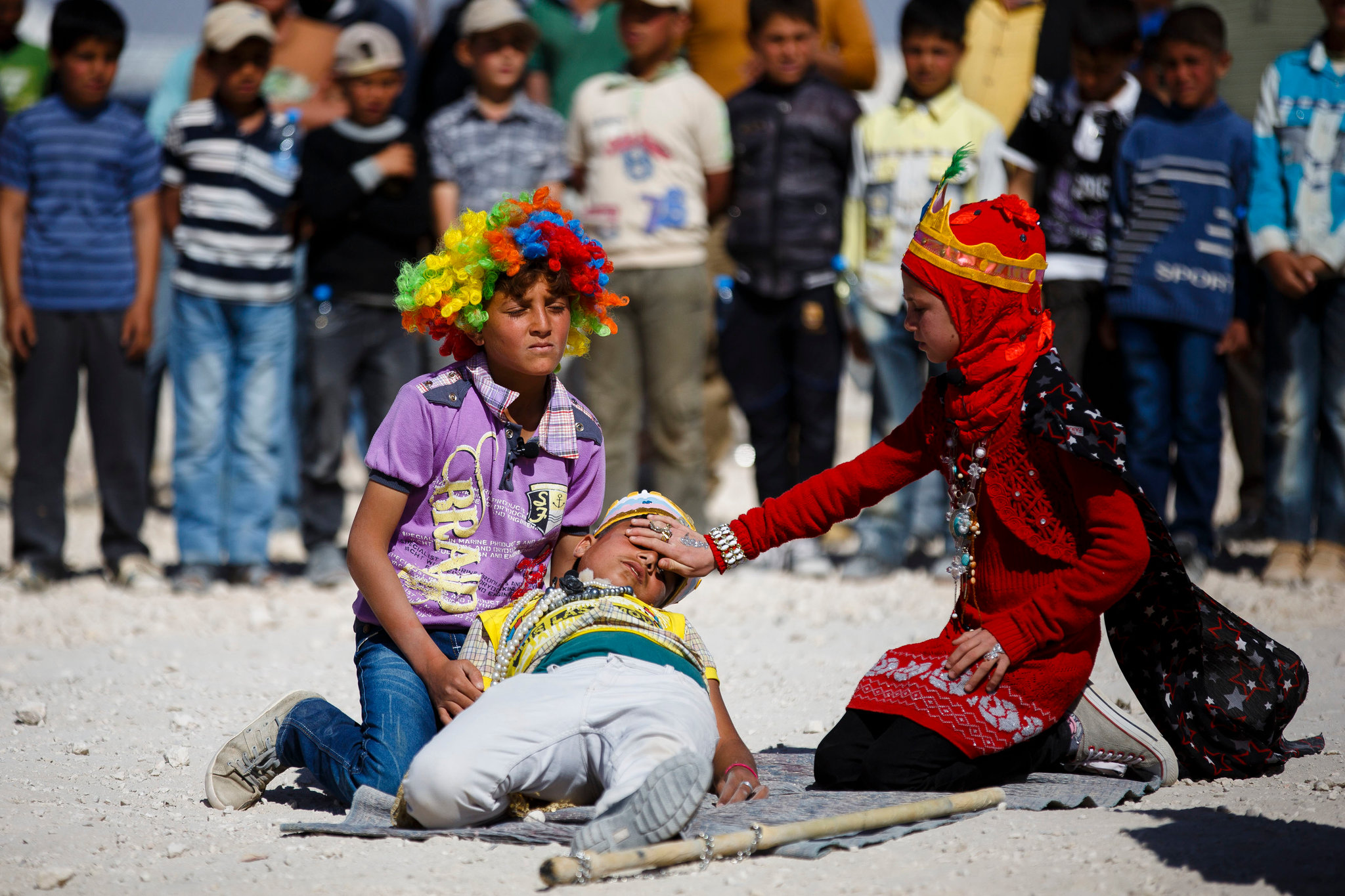 Arab Shakespeare functioned the way he often does in a recent, moving New York Times article by Ben Hubbard, "Behind Barbed Wire, Shakespeare Inspires a Cast of Young Syrians."
A heartwarmer. A breath of fresh air amid the relentless arid struggle that characterizes not only these refugees' lives but also most US news coverage of the Middle East.  More than that, a human interest story, using our familiar old Shakespeare (memories high school theatricals) to humanize the young refugees.

“The show is to bring back laughter, joy and humanity,” said its director, Nawar Bulbul, a 40-year-old Syrian actor known at home for his role in “Bab al-Hara,” an enormously popular historical drama that was broadcast throughout the Arab world.


Clumsily spliced (because even though it's a performance of King Lear, it has to end, of course, with an uplifting chant of Hamlet's "To be or not to be"), sparingly staged, the performance seems to have been heartwarming for the participants and their families as well.  If there were many contemporary resonances with Lear and Cordelia's plight, no one mentions them in the NYT piece.  But of course this is Shakespeare's darkest play and not unrelated to the situation in Syria: "As flies to wanton boys are we to th' gods. They kill us for their sport."

Tangentially related, here's part of what one of my first-year students, Rachel Long, wrote last semester in introducing her midterm assignment, a short-story adaptation of King Lear 5.3 that she set in a POW camp:


This scene, set in recent times in an unspecified region, takes place immediately after Cordelia is defeated in battle by Regan, Goneril, Albany and Edmund. My intention in this scene was to briefly emphasize the descent of law and order into a struggle for power and control. This adaptation would attempt to do so by illustrating how King Lear begins in a structuralized environment where Lear is king with legitimate rules and laws, and is transformed into a structure where those who have power took it through force, namely through a civil war, and manipulation. The rest of the adaptation would ideally emphasize the means by which Regan, Goneril and Edmund plot to strip Lear on all political power.

And her adaptation begins:

Lear and Cordelia were transported in large, battered, old van, crammed full with other prisoners, so cramped that not a soul was able to sit down. As the van drew closer to the camp, the passengers slowly ceased to talk – and in the face of the immediate future neither Lear nor Cordelia could think of a single thing to say. Before this Lear had been quite vocal, imaging a world where he and Cordelia would escape and live by themselves, without cares. He was much relieved to be reunited with his daughter; and it seemed to restore much of his good cheer and sense. That cheer faded, however, not long after the vehicle started moving. Lear and Cordelia simply stood by each other now, holding hands, attempting to ward off the heavy trepidation about their destination, having little hope to give. Their fates were now in the control of Edmund, Regan and Goneril, whom Lear refuses to confront despite Cordelia’s urging. But Cordelia’s pleas fell on deft ears and she soon fell silent as she anticipate what was to come.
Cordelia’s first impression of the war camp was deeply unsettling. The buildings themselves were rather unassuming, having the appearance of large brick barnlike buildings which Cordelia knew used to function as soldier’s barracks many years ago, but now they seemed to possess an aura that screamed hopelessness. The landscape was barren, with no trees or shrubs in the near vicinity. The ground was mostly dirt, with large puddles of mud scattered throughout, evidence of a recent rainfall. A sign by the entrance proclaimed “War Camp Ogden, _________.” By avoiding the terminology “Prisoner of War,” their captors were able to avoid the requirements set by the Geneva Convention, which would guarantee fair treatment to prisoners. But the most disturbing facet of the camp was the lack of life. Other than the soldiers that policed it, there was no evidence of human activity. It seemed to be waiting to devour those unfortunate enough to step foot inside. New, unoccupied, but unspeakably weary at the same time. The entire camp was encircled with barbed wire and had guards posted at regular intervals, insuring beyond a doubt that no captive would escape. And in that moment, Cordelia knew she would never again leave this place.

Yes, it's good when IR students do literature.

Posted by Margaret Litvin at 10:12 AM